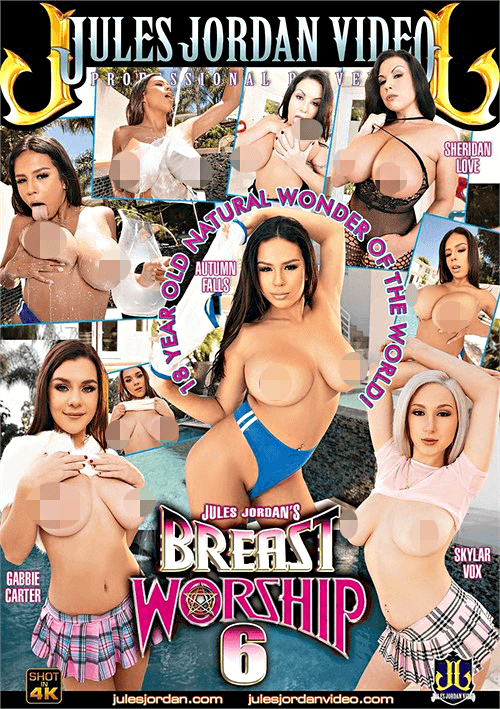 The best breasts in the West! That’s definitely what you get in this salacious sixth volume of “Breast Worship,” with some of the most busty, curvaceous women getting their tits worshipped, while the ladies also quite happily worship dick with their pussies, mouths and (yes!) boobs in this fiery gonzo from director/performer Jules Jordan.

We begin with a showstopper, indeed, as 19-year-old reigning XBIZ Best New Starlet Autumn Falls, with the amazing bodily dimensions of 32DD-24-35, proves what a true screen star she is, with Jules himself banging her silly. After some terrific glam shots — I really dug seeing Falls pour milk all over her all-natural, world-class tits — Jules goes crazy with the chick at poolside; those incredible chest orbs on Falls swirling oh-so-hornily during reverse-cowgirl, spoon and missionary; while her first-class ass is grand to behold wigglin’ during cowgirl and doggie; and let’s not forget what an awesome deepthroater she is, here getting seriously face-fucked on more than one occasion by Jules’ joint. Whoa!

One of my favorites of this buxom batch of babes, 35-year-old comely cougar Sheridan Love is a 34G-24-38 brunette fox, wearing a way-arousing body stocking (with a big hole for her big ass to stick out of!), Jules more than willing to get back into the action; brilliant moments being when they both suck on Sher’s huge, all-natch titties (they look even better all slicked down!); Sher getting that succulent backside banged during doggie; those gelatinous butt cheeks are even more animated — as well as her stupendous juggs! — during cowgirl (she digs getting spanked, as well!); her thick, delicious cunt being in our face during hammering missionary; and Sher frequently gagging on Jules’ joystick (and I mean to the bone!), including lusty Love sucking his rod while Jordan tit-fucks her, before she gets him off with those same mammoth mams. Love her!

And it’s an apocalyptic ending, for sure, with blonde cutie Skylar Vox, all 34DD-24-34 of her 20-year-old knock-out bod, here getting poked and pounded by Russian stud Markus Dupree; amazing moments being just watching Skylar shake her long (a good thing!) and sloppy (an even better thing!) “giant young titties” (Jules’ words) and juicy ass; wincing as Markus chest burns her cleavage while wildly fucking her tits with Dupree dick; Vox butt bongos undulating with a mind all their own as she rides the perv cowgirl style; fantastic eye contact, moans, groans and screams from Sky as Dupree pummels her pussy (and chokes her) during missionary, getting her to squirt all over the place (another movie highlight!); Sky losing herself during another round o’ raging doggie, while whorishly looking over her delicate shoulder with her pretty face at her obsessed (I believe it!) invader, before the babe-a-roo gets her cute face cocooned with cream, from forehead to chin. Mama! Really love this chick!

Yep, it’s quite the fearsome foursome o’ female foxes here — boobs, butts and all! — with high points going to director/videographer Jordan and second videographer Elliot Clixx’s excellent coverage of the molten mam material; while I have to give extra high points to Sheridan Love and (one of my faves now) Skylar Vox, older and younger babes, respectively, who just don’t quit when it comes to the sucking and fucking. Seriously recommended raunch!