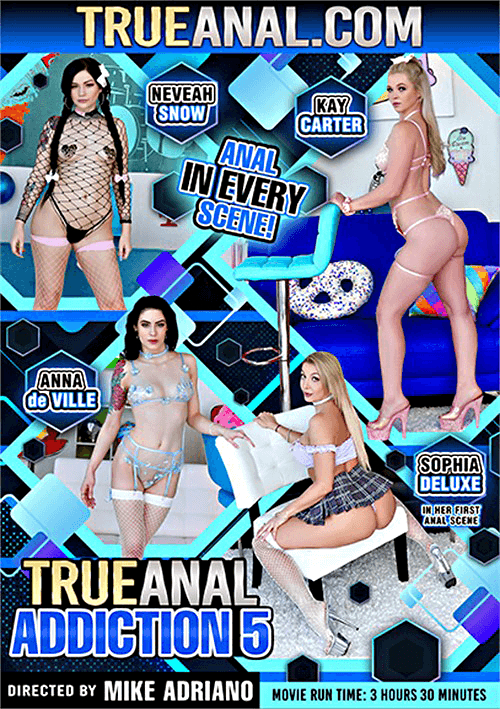 Blonde tart Sophia Deluxe gets the Adriano-ass-blast treatment next. I love her eye contact with Mikey, as he slowly penetrates her anus via missionary; though, once again, I think Deluxe’s best interlude here is when Sophia-sphincter is riding Mikey during cowgirl. An energetic gal, she knows how to move that moneymaker! Greased-up doggie-anal with the ever-smiling Sophia is also pretty mind-blowing/dick-exploding! Mike eventually erupts Adriano-jam into Soph’s butthole during reverse-cowgirl-anal, shot from his POV, with our man Mikey having her push the spermatozoa out into a fluted glass and then drink it (gulp!) down. Yep, Soph’s definitely one superlative slut!

And we have two more even steamier scenes to go! Bespectacled Anna DeVille is another salacious sweetie. It’s truly fab seeing Anna’s large, succulent pussy just screaming at us when Mike bangs her backdoor during reverse-cowgirl-anal — ditto for missionary-anal, which I think is DeVille’s very best position. But witnessing Anna-baby majorly gape during doggie-anal is a movie highlight; Mikey ultimately jerking off into her dilated anus during that same scalding position, after which she brilliantly rosebuds/ejects the stuff out and into a martini glass, quickly swallowing it all down. And did I mention that I love dear little Anna’s spectacles?…