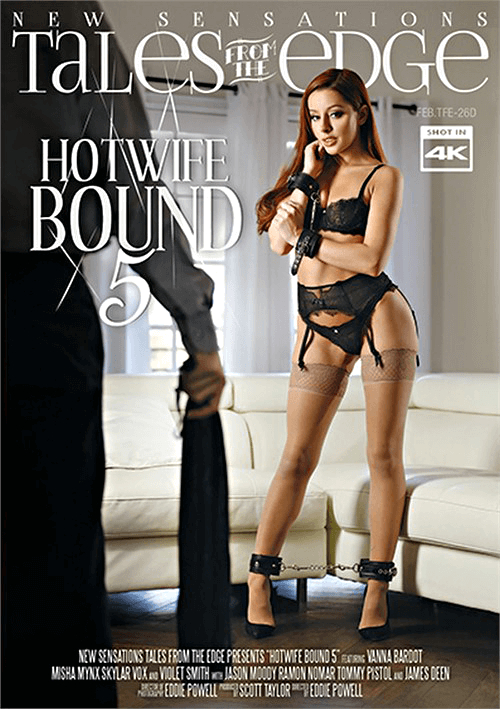 Beautiful submissives — ranging from 20 to 36 years of age — get way kinky for our masturbatory pleasure in this fantastic fifth volume of “Hotwife Bound” from the good pervs at New Sensations.

But in my favorite scene, cute, all-around juicy blonde Skylar Vox has her hands tied (for the most part) and gets way naughty with Ramon Nomar; her most volcanic segments being when her tits and ass are gyrating during doggie; her awesome butt is madly shaking during cowgirl; those amazing headlights are hypnotically swirling during reverse-cowgirl, spoon and missionary; as well as when she oh so whorishly inhales Ramon-rod, before he ultimately sprays seed all over those world-class hooters. Love her!

Delectable brunette Violet Smith gets the “Hotwife Bound” treatment from Jason Moody; and, boy, does this chick have one round and succulent butt, which she enjoys getting spanked via riding crop (our girl soon having her hands tied); spoon a la Smith being particularly terrific with that luscious rump on her, while that same superior posterior shines during cowgirl; Violet’s deliciously meaty thighs in our face during reverse-cowgirl; while her large, all-natural breasts and scrumptious rump crazily sway during a final session of deep doggie; Moodinski eventually dumping Jace juice all over her “teets” as he pronounces ‘em. Yep, Violet’s yet another all-around winner!