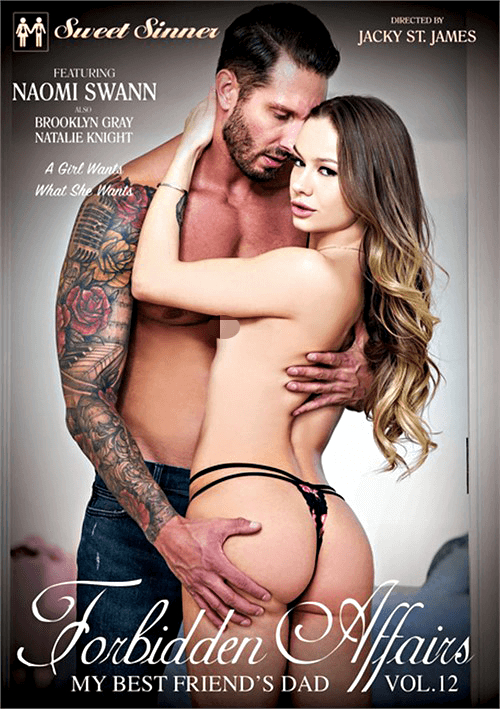 As the subtitle of this delightfully dirty Sweet Sinner feature more than implies, tasty/amorous young ladies happily get it on with their best friend’s dad, with the amazing Naomi Swann appearing in (hooray!) two (count ‘em two!) sizzling scenes!

And we start with none other than the amazing Miss Swann herself, here getting it on — in a very bright, white room, including a sofa — with Stirling Cooper; Swann looking fantastic and performing equally so. Check out how, after she gets her pussy well-eaten, Naomi goes balls-deep with Cooper-cock. Damn, girl! Swann, as always, never puts in a bad position — the audience especially gets to fully appreciate her scrumptious spinner’s body during reverse-cowgirl — but my own personal fave is doggie. Man, does this newbie have a tight little butt. Perfect! (Coop thinks so, too, as he ultimately spurts all over Swann’s fine fanny.) Love ya, Naomi!

Brunette Brooklyn Gray accuses her friend Naomi of having “daddy issues” (apparently Swann didn’t know that the older Cooper was married; yeah, sure); with the rather pompous but (she’s forgiven ‘cause she’s so) sexy-as-hell Ms. Gray having her own “father” issues, as she winds up getting down and dirty with her older “therapist,” played by Tommy Gunn, in his office, in another whirlwind of a suck-fuck sequence. And, boy, does Brook go deep on Tommy-tool, getting that boner all shiny, wet, stiff and ready to penetrate her good and proper. Brook (like Naomi) looks terrif in all of her positions, including cowgirl (great ass), doggie (ditto) and missionary (love Brook’s face and tits, with our girl giving loads of eye contact, even during doggie); the cock-hungry vixen eventually jerking off Gunn-cum onto her tum at the climax of the mish posish. Whew!

And we end with a bang, as the delectable, incredibly seductive Naomi Swann returns in a primo pump scene (her likeable character is, actually, featured throughout the movie), getting naughty this time with (yep, her best friend’s father; in the form of the very lucky) Quinton James (that guy is sure making the fresh-meat rounds, isn’t he?); best moments being Jimbo eating Swann-slit, with Swann hornily reacting oh so intensely; Swann worshipping raging hard-on with her curious mouth (including plenty of dick-hardening eye contact); Naomi riding James-joint cowgirl style; Swann doing a second raunch round o’ deepthroating; and pounding, passionate missionary with (yet again!) lots of welcomed eye contact from sweet yet salacious Swann.

In a fun, frothy feature (from skilled director Jacky St. James) with a simple plot, the three featured foxes — Naomi, Brooklyn and Natalie — all look incredible and perform swimmingly; and, yes I confess that Swann is a total fave; but I similarly have to admit that Brook and Nat are pretty damn enjoyable to watch in action, too. Recommended for both curious couples, as well as hardcore fans of Swann, Gray and Knight.