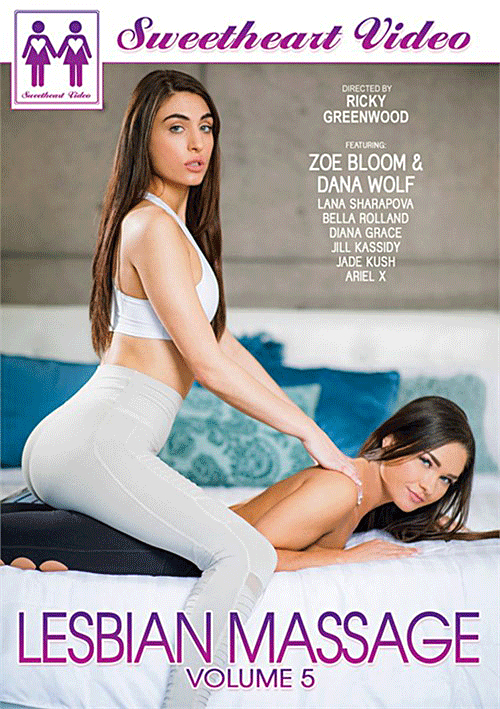 Sweetheart Video presents a collection of lesbian scenes revolving around the eroticism of massage.

Veronica (Jade Kush) opens this tale with some voice over work giving exposition to her motivations for the benefit of the audience. She loves touching the female body, and she makes clear her distinct desires regarding what turns her on about the female form. This is a good way to get the audience primed for the action. We learn what motivates Veronica, and we get an expectation of how she might react to her client. That’s a good setup.

The client turns out to be the hardbodied Bella (Ariel X), and we get a nice play on the proverbial striptease as she undresses and gets situated on the table. Staying true to the fantasy, we spend a lot of time witnessing the sensual massage as Veronica slowly rubs her hands all over Bella’s body, playing into her voiceover fantasy from earlier. When Bella mentions that she wishes she could get an all-day massage but likely couldn’t afford it, Veronica suggests Bella has something of value to her.

“Touch Me Like I’ve Never Been Touched Before” (Jill Kassidy and Lana Sharapova):

One of Jane’s (Jill Kassidy) regular clients calls unexpectedly and leaves her an exciting voicemail. She’s finally broken up with her boyfriend and come out as gay to her parents. With the immense weight of hiding who she is lifted from her shoulders, Jessie (Lana Sharapova) is hoping to get into Jane’s spa for a day of relaxation and celebration. Jane’s own experience with coming out motivates her to support her newly liberated client, and she agrees to fit Jessie in.

I really enjoyed the conversation between these two that leads up to the sex. Jessie talks about the stress of coming out and leaving the man she thought she was going to marry behind, the pressure to deny her feelings as a phase, and the relief of no longer having to pretend. Jane is wonderfully supportive. She listens, affirms Jessie’s fears and triumphs, and reassures her through her doubts.

After a brutal cramp ends Jessica’s (Zoe Bloom) workout early, Betty (Dana Wolf) helps her injured friend to the bedroom to lie down. Rather than chastise Jessica for not properly hydrating, Betty decides to ease her friend’s pain with a gentle rubdown. Of course, this leads to a sensual, sexual encounter.

In fact, ass fans will really enjoy this scene because there are lots of shots that embrace the derrière including a scalding face-sitting sequence where Zoe grinds herself to orgasm on Dana’s wagging tongue.

I really want to give Bella Rolland (one of my favorite performers) credit because she feels like a natural actor here. Her dialogue comes easy and is full of life and emotion, allowing Diana to play off her performance nicely. There is some great tease camera work in this scene as well. The close-up of Diana dripping oil on Bella’s pubic hair is incredibly hot and helps build the anticipation for the ensuing sex. The devious smile on Diana’s face only heightens the sensation.

When Diana finally lets her tongue touch Bella’s clit, Bella’s reaction is a combination of pulsating hunger and gratitude. She responds by promptly bending Diana into a piledriver and diving into her pussy and asshole ravenously. This is the position of the movie and I’m so glad it lasted longer than a few heartbeats. The audience really gets the chance to revel in the glory that is Bella feasting on a physically vulnerable yet wanton Diana.